Here is extreme example of cyber branding - Google announced popular Gmail that works with motion....Google told on April 01 :   "Gmail Motion is a new way to control Gmail using BODY LANGUAGE !   To us Gmal Motion software, you will need a comptuer with a webcam.  Google Gmail will recognize your movement with a spatial tracking algorithm.

We designed the movements to be easy and intuitive to perform and consulted with top experts in kinestetics and body movement in devising them.


Google also had a number of non-hoaxes on April 1. The biggest was the Gmail launch in 2004, something that many had thought to be a hoax.  For instance:

Google's history of April 1 jokes can be traced back to the year 2000 when Google announced the launch of MentalPlex, when Google asked its users to focus on a swirling spiral and project a mental image of what they wanted to search for and the results page displayed humourous error messages.

MentalPlex was followed by PigeonRank, where Google claimed that it used pigeons for its PageRank system.
What is your guess?  What do you think Google prank will be on this April Fool's Day ?
Posted by Jyotindra Zaveri at 10:43 AM No comments: 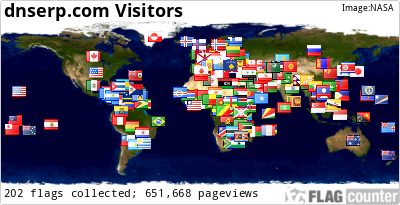 See right side bar to get real-time country wise details. Click the flags to view real-time reports.8
47,349 unique visitors from over 165 countries.  Plain old hit-counters are boring.  Collect flags and learn about your visitors.  Especially if you are doing international business, it will be a good idea to know if your visitors are from your targeted country.

This analytic gives automatic country wise break-up.  Every time someone from a new country visits your site, a flag will be added to your counter.  Not only will this make your website more interesting, but clicking on your Flag Counter will reveal amazing information and charts.
These charts shows the power of the internet marketing and automatic reports which can help you to fine-tune your marketing strategies.  Country wise, or region wise, American state wise analysis should match with your target audience and other marketing game plan.


dnserp.com website contains over 300 web-pages full of information pertaining to topics such as ERP, social media marketing, Web 2.0,  e-Commerce, Supply Chain Management, MIS, and much more -  dnserp.com is like an encyclopedia of these subjects. It is cool.  No wonder it has crossed the One Lac visitors mark.    Please visit the site map to navigate this exhaustive website or select the topic from the alphabetical list. 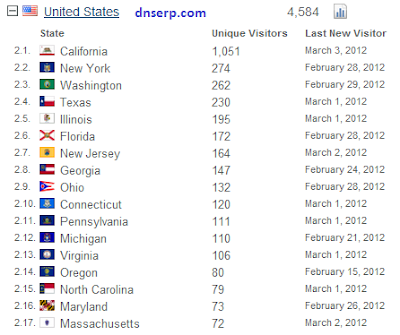 Point is unless you measure, you cannot improve.  What do you say? Your comment will be appreciated.

Posted by Jyotindra Zaveri at 1:51 PM No comments: